First off let me just say to those of you being blessed with a white Christmas how envious I am of you lot. 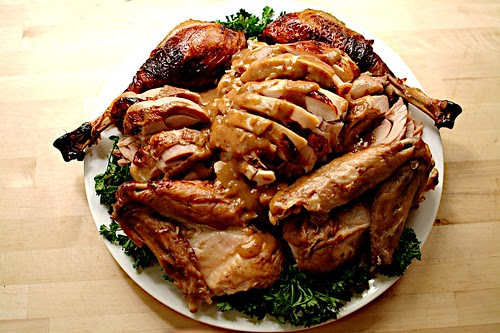 Please throw a snowball at me and pass over your cup of hot chocolate with homemade peppermint marshmallows floating in it. In addition, to those of you who are on leave till next year, I… well, would like to be in your warm socks. I hope you had a blast with lots of love and warmth all around. Having barely gathered ourselves back together from our trip Down Under, this year we did everything at the last minute while still trying to shake off our post-vacation blues. 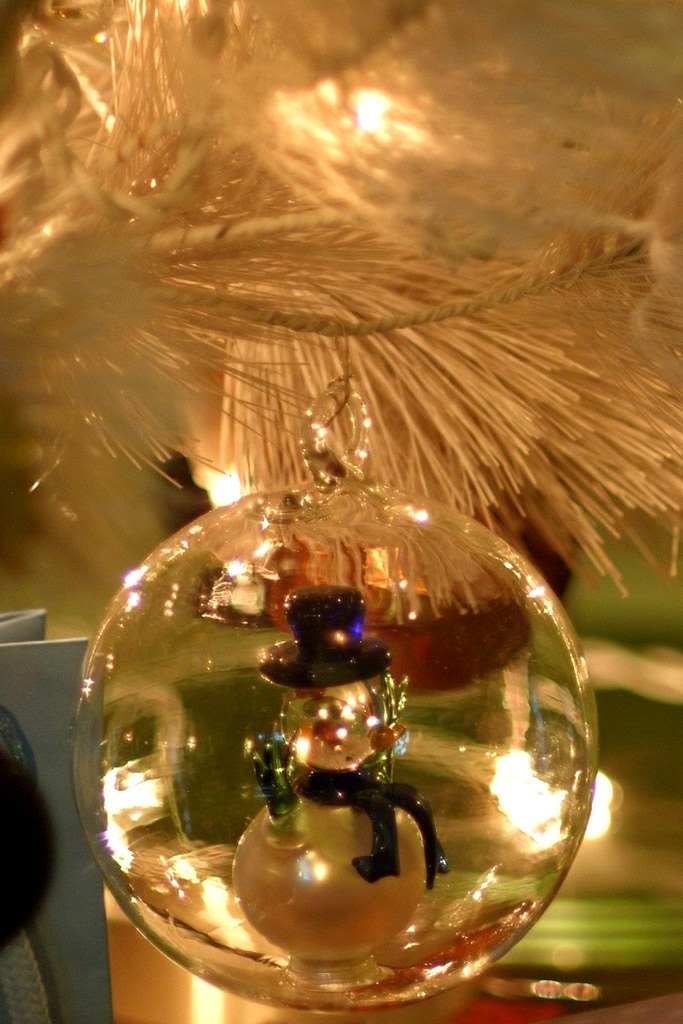 The tree and it’s trimmings was from last year – I got one new glass bauble free from buying two tubs of Häagen-Dazs, the lingering holiday luggage unpacked and apartment cleaned the day before Christmas Eve and the bird booked on the very last moment before our butcher threatened with repeated email reminders to take no more orders. 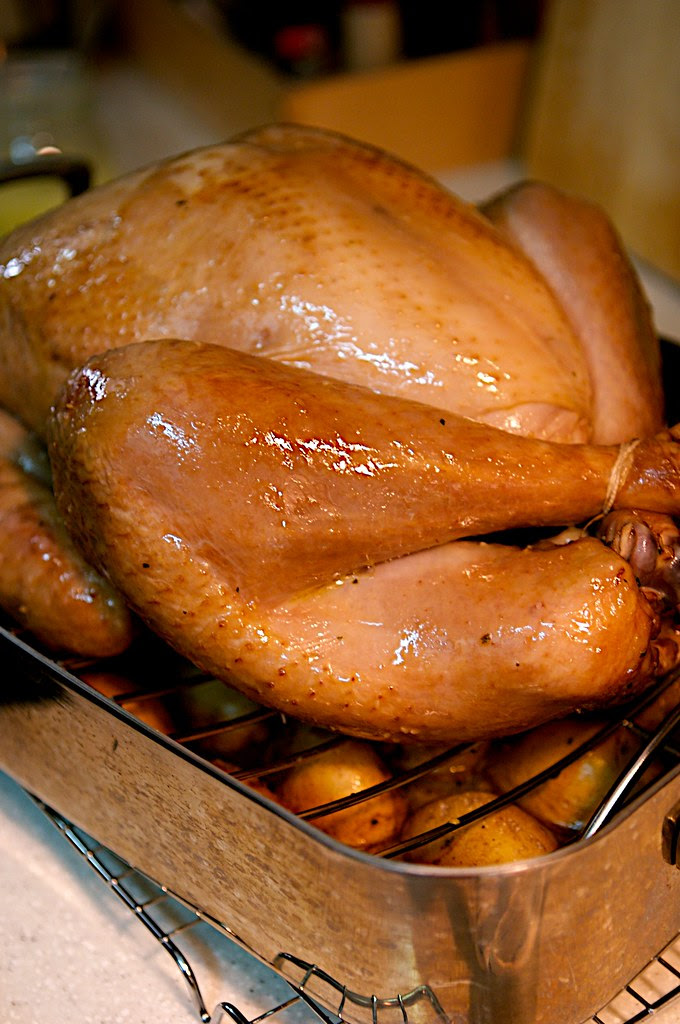 Some form of roast is always called for to address the season. Since we don’t have Thanksgiving here, turkeys and their respective produces such as cranberries and readymade stuffing are imported for preparing Noel celebration meals. I was contemplating between Ellie’s mouthwatering (her mother’s recipe!) Asian duck and The Pioneer Woman’s delicious looking turkey (complete with brining and gravy making instructions).

In the end I went with the turkey because #1 – leftovers are a good thing for two lost souls still struck with love for beautiful Melbourne and will probably not be bothered with cooking anything serious till next year arrives, and #2 – I could stick some baby potatoes underneath the bird, toss up a salad and voila, a complete meal. 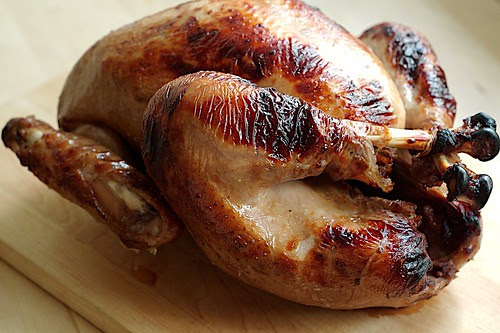 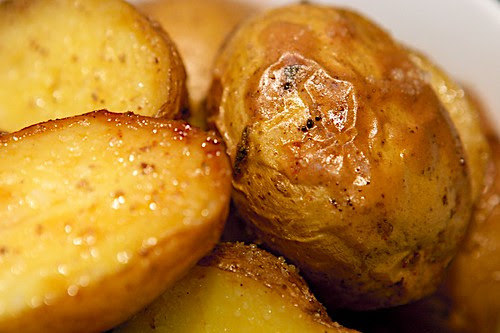 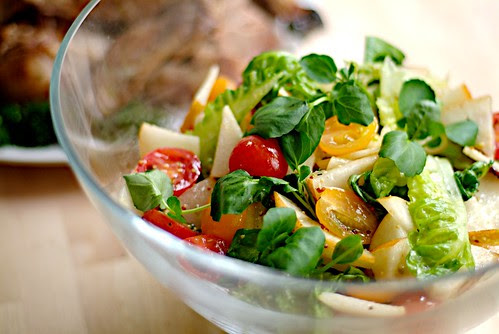 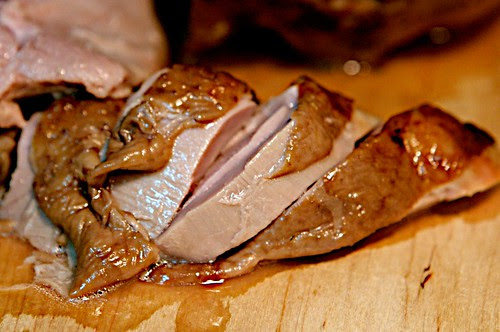 Having never cooked a turkey before in my life (yes, I know, where have I been but even some chefs haven't done it!), I’ve seen and heard enough to not fool around with stuffing (not much of a fan of that anyway) and end up with meat that taste like pieces of tree barks. Brining not only renders the roast moist but adds flavor. 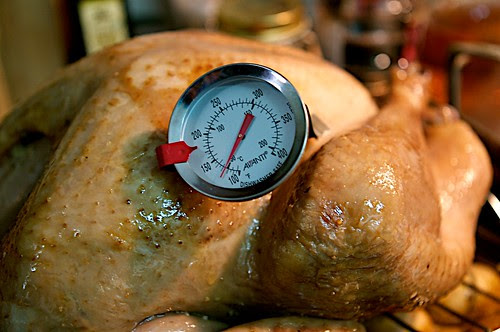 The 11-ish pound bird I got fit snugly into the largest Ziploc bag I could find in the supermarket, which meant it could brine away safely tucked in the fridge rather than in a cooler bucket of ice (a real risk in our weather which requires three air conditioning units in one small apartment)… which meant there would be no space left in our tiny fridge for much else… which meant I would have to hit the grocers on Christmas morning to get produce. How much more down to the wire could we have gone? 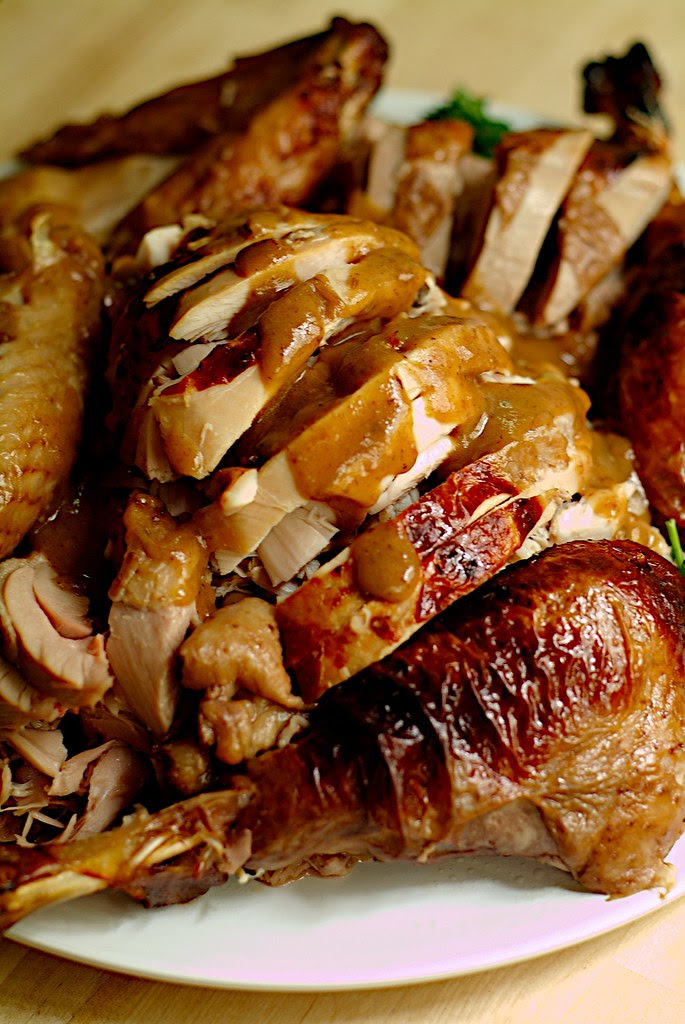 That aside, our first homemade Christmas dinner was a success (in Vijay’s words, “Another first hit.”). The juicy turkey went well with the freshly made cranberry jam and the turkey-dripping-gravy absolutely lips smacking. The salad was my attempt to recreate what I frequently order at Bakerzin – with crisp, sweet pears and simply dressed with olive oil and grainy mustard. 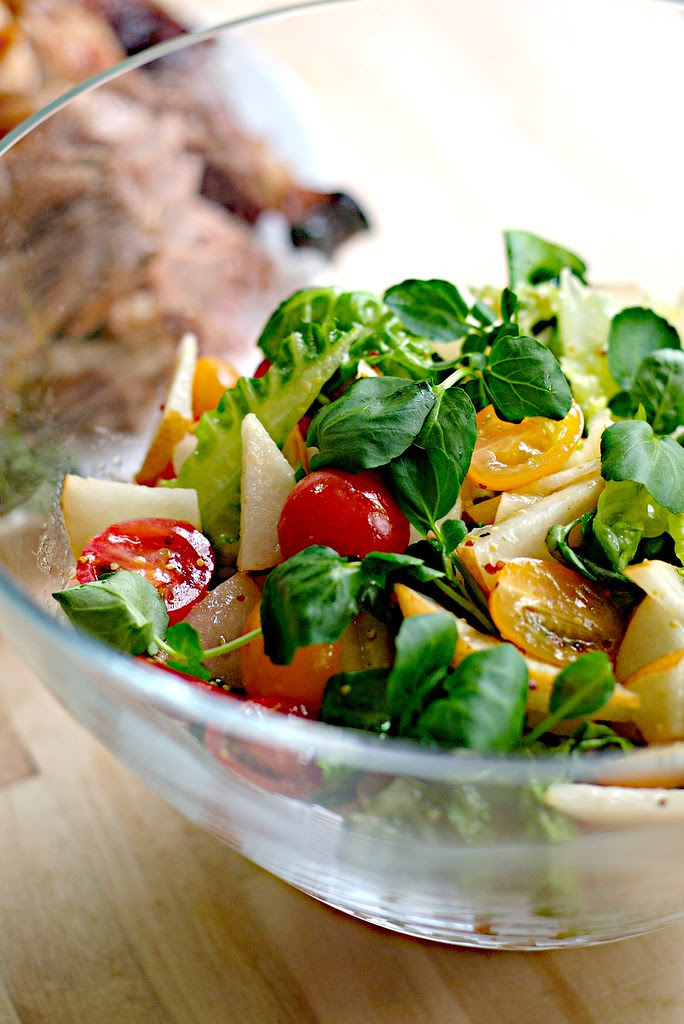 Boxing Day was the start of leftovers galore, I had no worries when a friend came over for dinner – just mix some turkey meat into an aglio olio and bring out the spicy gingerbread cookies (made on the night of Christmas Eve!) to go with the port (apparently this is a German tradition). 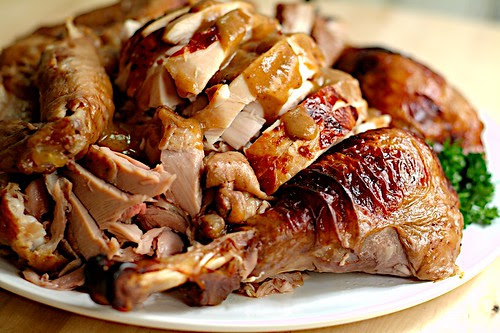 Yesterday Vijay piled his plate of sourdough high with turkey shreds, some potatoes and gravy. It amused me to no end when he then cut out a mouthful, chewed briefly and contemplated for a moment before asking me if we had paper suitable to make a sandwich wrap. I think we’re going to be good till New Year’s Eve. 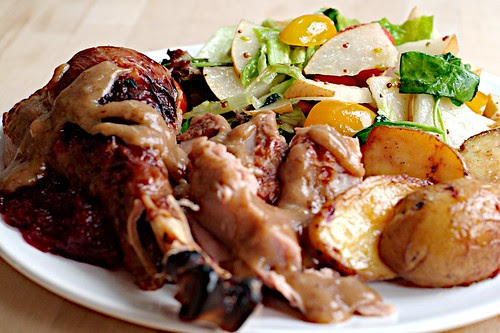 Till then, if you don’t hear from me (these crazy year-end days, who knows?), happy holidays and all the best for 2011!

Recipes for brine, roast and gravy adapted barely from Ree Drummond’s The Pioneer Woman
Serving depends on the size of turkey, a 20 pound turkey serves 12

Ree’s brine recipe is enough for a 20 pound turkey. For my bird I made 2/3 of the recipe and added a cup of pomegranate juice, a few pieces of dried mandarin peel, zest of one lemon and two sprigs of thyme. When roasting the turkey I added potatoes at the bottom of the pan. For the gravy I did not use the gizzard and adjusted the instructions according to the amount of drippings I get from my smaller bird – adjust yours accordingly.


Brine the turkey: Combine all ingredients in a large pot. Stir until salt and sugar dissolve. Bring to a boil, and then turn off heat and cover. Allow to cool completely, and then pour into a large brining bag (I used a large Ziploc bag) or pot. Place uncooked turkey in brine solution, then refrigerate for 16 to 24 hours (mine was left brining for about 32 hours).

Meanwhile, preheat the oven to 275⁰F. In a large heavy duty roasting pan, smear the pan with some butter. Half the potatoes and arrange neatly in one layer on the pan, season to taste. Place the roasting rack on top. Tuck the legs and wings of the turkey according to your liking and place the bird, breast side up on the roasting rack. Cover the turkey tightly with heavy-duty foil. Make sure it is entirely covered (cover over the bottom edges of the pan).

Place the turkey into the oven and move on to other things (I used this time to prepare the cranberry jam and err, watch an episode of Masterchef Australia). Roast the turkey at 275⁰F for about 10 minutes per pound. So for my 11-pound turkey, I roasted it at 275 degrees for about 2 hours.

Place the turkey uncovered back into the oven. Continue roasting the turkey, basting with butter every 30 minutes until the thermometer registers 170⁰F or until the juices are no longer pink. (Mine took just about 25 minutes uncovered to come to 175⁰F, so for a smaller bird I reckon you should watch the thermometer and check the juices around the 20 minute mark to avoid overcooking it).

Remove from oven and transfer the turkey onto the chopping board. Cover with foil for at least 30 minutes before serving. Meanwhile, prepare the delicious gravy.

Make the gravy: Pour the drippings left in the roasting pan into a wide heatproof bowl for it to separate (like Ree, I used a 1 liter Pyrex measuring cup). Place the roasting pan onto the stove on low heat. If you can, use two burners – I can’t, so I had to move my pan around.

Skim the fat off the separated drippings into another bowl. Put 2 tablespoons of fat back into the pan. Sprinkle onto the pan 3 tablespoons of flour. With a flat whisk, mix the flour into the fat, scrapping the bottom and sides of the pan as you go. Keep stirring until combined, keeping a pasty but still mixable consistency. If it is too cakey or dry, add a little bit of fat. Cook the roux for about 4 to 5 minutes. Do not be concerned of a bits sticking, they will come off once the stock is added.

With the heat still on, add the chicken stock, whisking as you go. Whisk quickly to get all the roux mixed in with the liquid. Add in the reserved drippings (not the fat). Continue stirring till gravy thickens slightly. If you like a clean looking gravy, go ahead a pass it through a strainer. If the gravy is too thick (it thickens slightly as it cools), add some chicken stock or water. Season to taste with salt and pepper.

Inspired by the pear salad from Bakerzin
Serves 4


In a small jar or bottle, shake the olive oil, mustard and seasonings into a smooth dressing. Dress the salad just before serving, tossing well to coat. Add a few sprigs of watercress for garnish.

I made jam instead of sauce as it can go with bread easily since we will have plenty of leftover for keeps. To make the sauce instead just skip the corn starch.

Wash bag of cranberries under cool water, then dump into a medium saucepan. Add the pomegranate juice, sugar, lemon juice and lemon zest. Stir together and turn heat on high until it reaches a boil.

Once it comes to a rolling boil, turn the heat down to medium low and continue cooking over lower heat for about 10 minutes, or until the juice is thick. Mix the corn starch with a little water and stir it into the sauce. Once it thickens turn off the heat. Store in a sterilized mason jar to keep for longer than two weeks.

Your turkey looks so delicious! I found your blog through foodgawker.com I love turkey and looking at this picture, makes me want to eat this like RIGHTNOW.

Hey Pickyin, I have been too slow... the turkey looks amazing! Great Job! It is obvious that you totally enjoyed yourself in Australia... (but who wouldn't?):D

Ellie: Happy New Year to you too!

Shirley: Hope January won't be to hard on you with all that traveling. We want to go back to Australia soon. :D

But I can't seem to get fresh 'halal' turkey here. I know Pioneer Woman mentioned only to use fresh variety to brine. Any alternatives from your experience dear? x

Miza: I'm no good in sourcing halal turkey here either. Perhaps talk to some halal poultry vendors at markets and see? I doubt that you can get it locally. I got mine from The Butcher Singapore last year. 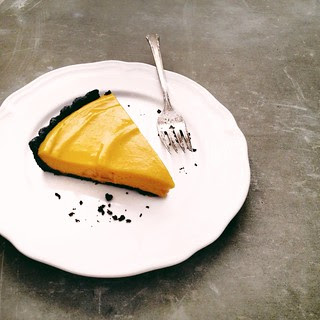 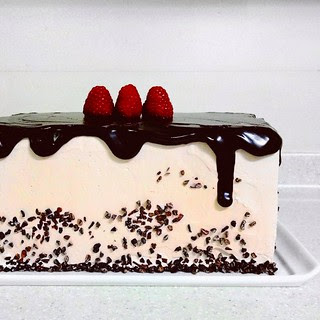 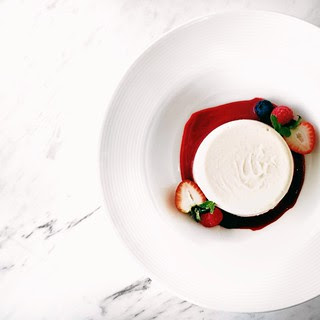 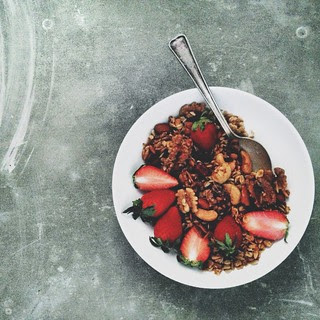