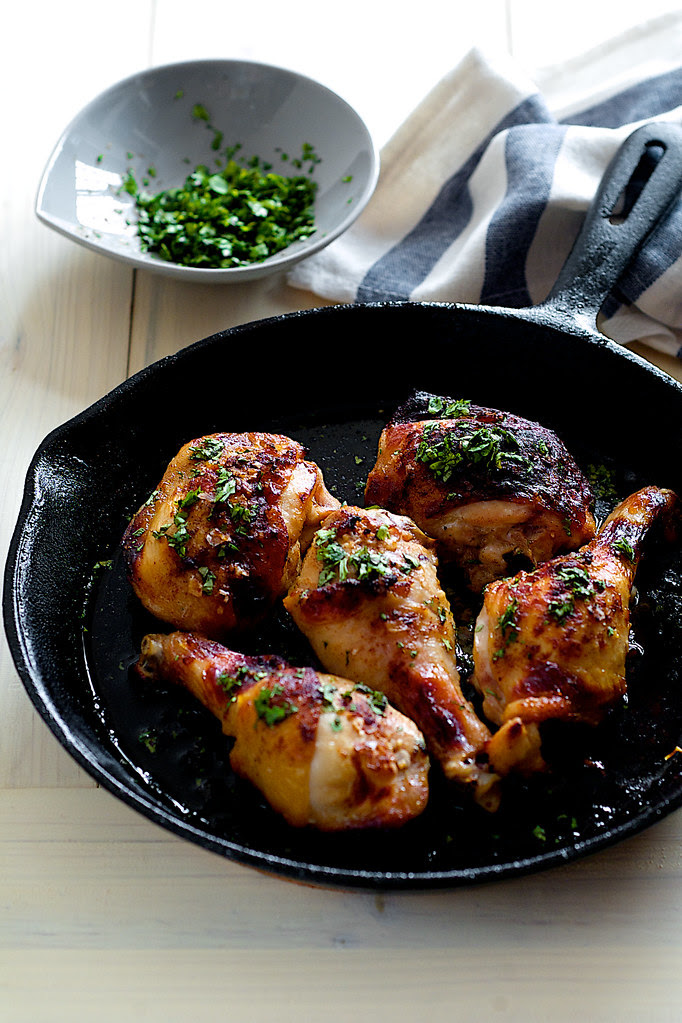 "So you love cooking huh?"

I get this from time to time, as if cooking is some sort of a hobby only a selected group of weird people do and not what our forefathers back in the primitive days of the Stone Age had done as soon as they mastered building a roasting pit and the hunting bit after the gathering. Struggling to come up with a response, my face would contract and my eyes would twitch. Should I say something politically correct (Oh I just do it for fun, you know...) or should I strive to inspire (It's more satisfying than eating out...) or should I just be honest (It's because I really, really, really love to eat!). Then out comes a mumbled "Uhuh...", to which is usually returned with "Oh but it's just so much work! All that prep, and heat, and washing..."

I don't know about you but I've always been a permanent fixture in the kitchen since I was old enough to figure out knives cut and fire burns. Initially I was assigned all the boring jobs like laying out old newspaper on the floor to catch all those Chinese stir fry oil splashes, washing produce, handing over the seasonings, frantically looking for that ingredient my mother forgot she needed, scrubbing the wok spotless for the next dish and folding up the brown, grease stained newspapers back for next time. Baking projects were similarly handled, where my mother took care of the complicated folding in while I did the apprentice leg work - arranging the mise, measuring, sifting, dividing eggs, washing up the buttered out mixing bowl and beaters.

By the time I was in high school, I'd spent enough evenings standing beside the stove observing my mother's moves to differentiate between just done and overcooked for meats and vegetables. My brother and I would come back to an empty house at lunch time with my parents away at work and I'd proceed to whip up things like fried noodles, fried rice, fish ball soup and chicken chop for us to be enjoyed in front of the tele, after which I'd make him do all the dishes while I wipe down the kitchen before my mother returned to prepare dinner. When the school had class parties (this was often, all my form teachers were ardent cooks), I would bake entire frosted cakes on my own to contribute. 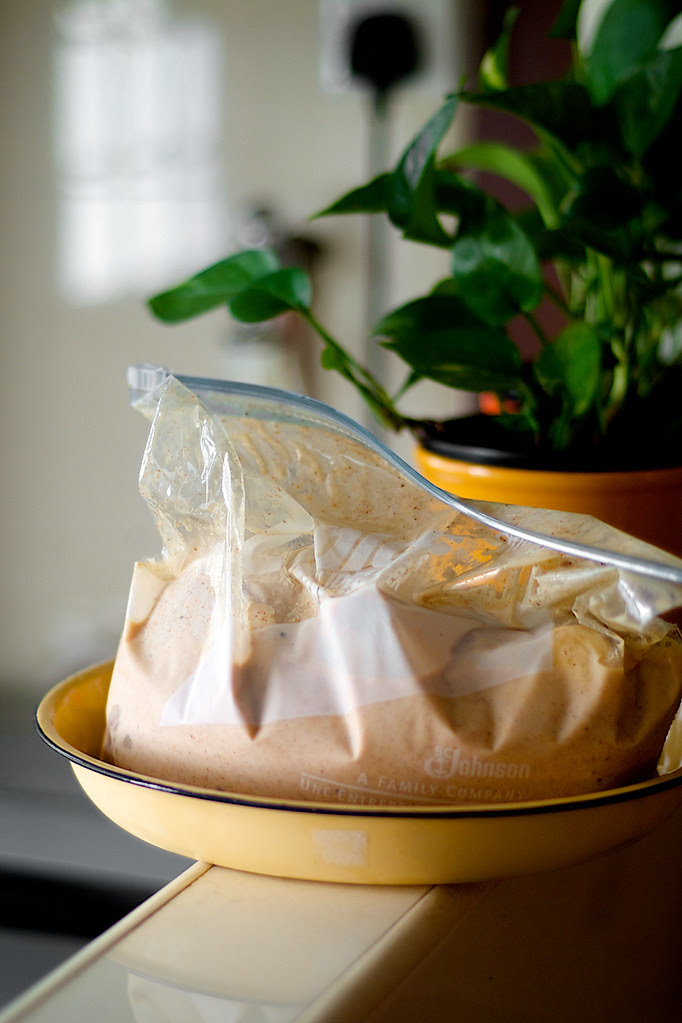 I find kitchen time a way to zone out into my own little world. There aren't a lot of waking hours available where my mind would be free to wander off in peace. As my knife methodically sliced through onions, chilies and garlic, I would be free to think about things - where should we go this weekend, should I get those linens from Etsy, where do I find a beige/cream dress for that friend's wedding in less than 2 weeks, crap (!) I still haven't booked that flight back to said wedding. Then I'd stash all the prep utensils into one sink bin, wipe down the bench and start the fire. If it was a dish I've done more than 20 times or am vaguely confident of even on the first attempt, I would continue with my daydreaming. As the chicken pieces sizzled and seared in the hot skillet, splashing goose fat all over the stove and counter, the buttermilk and smoked paprika brine aroma perhaps driving the next door neighbor crazy; I'd be thinking about vacationing in Melbourne again, if Vijay would like this new but no-brainer dish, what to eat for breakfast before work tomorrow and that I should've really taken down the laundry now that half of my work clothes all smelled of buttermilk chicken. 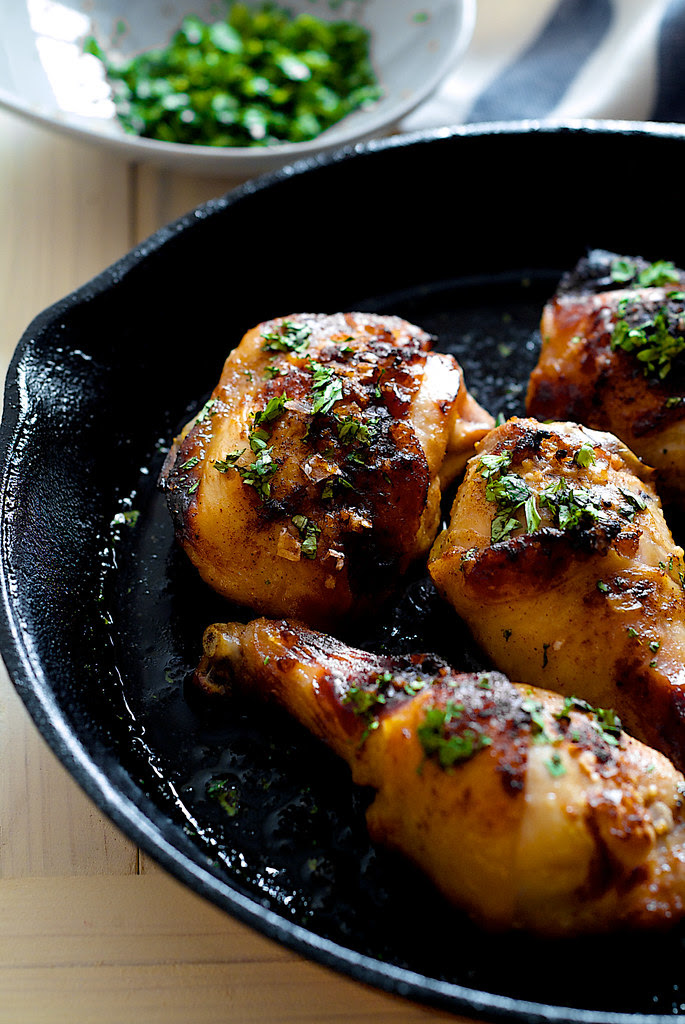 A meal which finishes in the oven is always best because in that 20-30 minutes I could continue wondering how fat I would look in a beige dress while my hands automatically run a damp dish towel down the oily counter and spotted backsplash. Then the dish soap gets squeezed into my blue plastic pail set in the clean bin of the sink and all the soiled stuff from the next bin get cleaned while I schemed carefully on how I could fit in 2 hours of workout the coming Saturday so I would look less like a beached whale tented up in beige, should I fail to convince the bride her less than size 6 girlfriends would all really be prettier in dark purple. Halfway into the roasting, I'd interrupt my bubbled dreams to take a peek into the oven just to make sure nothing was turning black. As eventually, even I began to smell like buttermilk roast chicken, the dish cloth got a good soaping before going through the counter, stove and hood once more.

The timer's beep would be the cue for me to step into the shower before Vijay would come through the front door from work, beaming and telling me how he could smell something fantastic all the way from the next block and both of us would be parked on the sofa with the kitchen behind us, my issues sorted, Mad Men running, over plates of tender, faintly spiced roast chicken. What's not to love about cooking?

Note: I made this in a cast iron skillet just because (1) I was too lazy to line a baking dish with parchment and (2) I wanted to use my cast ironware more often. There is really no need to line your baking dish if you're using this recipe as the sugar content is quite low and hardly any drippings result from it to give you a hard time at the sink. As usual, I made my own buttermilk as the boxed stuff had been missing from the store for weeks - use 1 tablespoon acid (lemon juice or vinegar) to 1 cup whole milk (I take no responsibilities if you use skim and then realize the outcome is short). I roasted 5 pieces after 48 hours and the rest 1 day later without incident.


In the measuring up of the buttermilk, whisk it with the garlic, salt, sugar, paprika and lots of freshly ground black pepper. Place all the chicken parts in a gallon-sized freezer bag (or lidded container) and pour the buttermilk brine over them. Swish it around so that all parts are covered. Refrigerate for at least 2 but preferably 24 and up to 48 hours (as mentioned earlier, we tried an extra 24 hours without incident).

When ready to roast, preheat oven to 425°F (fan on for convection). Heat up a cast iron skillet on medium high heat. Add in the goose/duck fat if using, drizzle over some olive oil. Remove chicken from buttermilk brine, shake off excess and arrange skin side up on the skillet. Turn off heat. (If using a baking dish, just arrange the chicken in it skin side up.) Drizzle lightly with olive oil, then sprinkle with additional paprika and sea salt to taste. Roast for 20 minutes if using cast iron skillet or 25-30 minutes if using baking dish, until brown and done. Garnish with herbs of choice if using, serve immediately with pan drippings over some potatoes or greens.